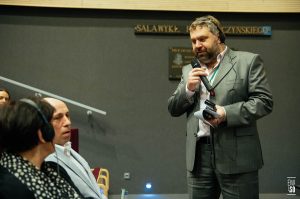 Dr.Vel: Vertebral disorders and how it affects the physiological and psychological development of children

See more about the conference https://imc.wroc.pl/relacja-z-miedzynarodowej-konferencji-medycznej-2016/

Today I would like to talk about our children. The level of medicine is rising. There are more and more successes in the treatment of various diseases, development of newer and newer drugs, including anticonvulsants, new rehabilitation methods. In spite of this, the number of sick children is not falling but increasing.

We frequently face the diagnoses infantile cerebral paralysis and autism. I would like to note here that these diagnoses are often made based on unexplained aetiology. More and more often we meet see children with secondary epilepsy. We say secondary because, while making all of these uncertained diagnoses, no primary cause has been diagnosed. Every treatment is aimed at healing the symptoms but almost never at eliminating the cause.

We will look at which direction medicine is moving in the treatment of ICP and autism. Let us start from the very beginning. A young family finds out that a miracle will soon happen: a baby is on its way. Young parents are happy. Tests have been done on the parents and no pathologies have been found. The future mother takes the correct vitamins, gets her regular check-ups, fetus is growing, the day arrives. Parents go to the delivery room and the child is born under medical supervision but something goes wrong.

It could be a number of things, uterine inertia, precipitate delivery, nucal cord, breech presentation.

We all know what a difficult ordeal lies the baby faces at this stage of his life. Birth is one of the most stressful experiences in life: a laboring uterus exerts incredible pressure to push a baby out into the world, it squeezes, twists and bends the child. The risk of a natal trauma in greatly increased if obstetrical forceps or ventouse are being applied, if the woman in labor has an anatomically narrow pelvis, if the fetus is big, if obstetrician’s actions are incorrect. A Caesar section is no guarantee that the baby will not receive a natal trauma. Now, when the complicated childbirth is over, parents breathe a sigh of relief. They are convinced that the scariest and the most difficult part is over. Three months pass and the mother notices that something is wrong with her child. He is rather weak, won’t hold his head up or turn over, doesn’t take any interest in colorful toys and pictures.
The worried mother sees a doctor but who really listens to a mother? The usual answer is “Don’t worry, some time needs to pass, the child will outgrow it”. Mother calms down. Then 6 more months pass by. Baby squints, he screams terribly at night, during the daytime he is often in a bad mood, has a bowel disorder, won’t crawl or even sit up. Parents have been taking their child to many doctors, rehabilitation centers, massage sessions and followed various recommendations but the result could have been better. About this time their child gets diagnosed with ICP or, if their baby has retained the ability to walk but has a psycho-speech delay in development, there’s a high chance of getting a diagnosis of autism.

The ICP abbreviation scares all parents and often sounds like a verdict. Those who have dealt with the infantile cerebral paralysis know how vague the causes of this disease are and how inaccurate the diagnosis can be. Modern medicine is not willing to try to help children avoid this dreadful diagnosis. In fact, physicians mostly try to ignore it and dismiss as quickly as possible the unfortunate parents. They explain their carelessness and unwillingness to deal with these children by a simple professional wording “What else did you expect? Your child has ICP”.

As for those who reach to medicine Themis and start treatment and rehabilitation, they soon realize that time creeps on with no obvious improvements or they are so slight that they have no affect on the child’s chances for recovery.

The thing is, that in making a diagnosis judging by the symptoms, few doctors take time to dig into the causes of these very symptoms. This is what really happened: during the trauma of the cervical vertebrae (this can happen not only during labor, but also intra-uterine!) craniovertebral damage occurs. These kinds of injuries include damages of the atlas, first cervical vertebrae, second cervical vertebrae, and the ligamentous apparatus. The seriousness of the issue of a correct diagnosis and proper treatment of craniovertebral damages is indicated by its high frequency and inaccessibility for regular methods of diagnostics / examination, as well as the lack of knowledge by the medical community in this area. During labor all pressure is exerted upon the atlas and axis. Sliding semiluxations in the limbs of these vertebrae nearly always result in blood circulation disorders in the vertebrobasilar basin, and/or cerebrospinal liquid dynamics disorder and as a consequence, brain development pathology.

The whole problem is that at the initial stage of pathologies’ development, that were cause by a trauma of the cervical spine, the symptoms do not appear immediately, but within a few months to a year. Exactly for this reason the early diagnosis of this disease is possible only through the private efforts of the treating doctor, but, unfortunately, this does not happen. The child for a period of time, sometimes lengthy, survives on his own body energy given to him in the womb, until it is exhausted and his condition sharply declines. As a sign of this decrease or exhaustion of this internal body energy can be: worsening vision, squinting, decrease in large and small motor skills, body coordination, and appearance of epileptic attacks, sleep and speech disorders, inadequate behavior and many other examples.

Very often the symptoms of the disorder, caused by absolutely other reasons, have taken on such a deep pathological development, that even when causes are eliminated, full recovery is rather problematical.

– Philip, 5 years old, breech presentation cesarean section. After birth diagnosed with torticollis. Rehabilitation prescribed. Philip had delayed development starting from his 6th month of life. At age 4 he started suffering strong chronic headaches, often ending in fainting fits. At age 5 he could not speak nor understand speech directed to him and was disoriented. EEG showed focuses of pre-epilepsy activity. The drug “Kepra” was prescribed. Expanded genetic and metabolic diagnostics revealed nothing.

There can be several causes connected with the structure and distribution of blood in the vertebral basilar basin (vertebro-basilaris). Vertebral arteries (a.vertebralis dex/sin) originate in the subclavian artery (a. Subclavia dex/sin), they then pass through the transverse foramen of cervical vertebrae. Before the vertebral arteries merge, there are vessels (a.spinalis anterior) that branch from them that also supply blood to the spinal cord. Merging of these vessels occurs at the level of rachidian bulb at the bottom of the 4th ventricle that regulates vasoconstriction and vasodilatation. This is where the vasomotor and respiratory center is located. This regulation runs through nerve centers of the sympathetic part of the involuntary nervous system.

Therefore, insufficient blood supply to the rachidian bulb may lead to vascular tone regulation disorder and, as a consequence, to hypoxia. This in turn affects chemoreceptors that are susceptible to carbon dioxide and oxygen deficit in the blood, tones the vessels that may also trigger high intracranial pressure and brain blood flow disorder.

Inside the skull, the two vertebral arteries (a.vertebralis dex/sin) join to form the singular basilar artery (a. Basilaris) that branches into two main vessels that feed the hindbrain (a.cerebri posterior). In a similar manner, another artery (a.cereberallis superior) branches from the basilar artery. It also supplies blood to the upper part of the cerebellum. Coming out from below the basilar artery a.cereberallis inferior anterior which feeds the back part of the cerebellum.

As you may have noticed, all blood vessels that supply cerebellum, rachidian bulb and the hindbrain, branch off from the vertebral and basilar artery.

Therefore, it becomes obvious that suffering an injury in the region of atlantooccipital and atlantoaxial joints may cause a high probability of blood circulation disorder in the vertebral basilar basin. This pathological process may engage most vital brain parts.

Now let us summarize the causes of developing a vertebral-basilar insufficiency. Young and middle age are mostly affected by external compression of vertebral arteries as a result of a osteophyte pressure, discal hernia and spasmed neck muscles caused by innervation disorder. The cause of vertebral-basilar insufficiency may also be the vertebral artery canal deformation that happened as a result of neck bone subluxation. The symptoms of blood circulation disorder may be caused by such maldevelopments as an extra cervical rib, vertebral artery hypoplasia, Kimmerly anomaly (Kimmerle) and Arnold-Chiari malformation (Arnold-Chiari). In our practice we have noticed formation of Kimmerly anomaly as a result of atlantooccipital joint pathological formation which in turn was triggered by natal traumas.

A large role in developing a vertebral-basilar insufficiency is played by pain spasms in the vertebral artery. Neck pain might provoke the formation of a pathological reflex. In addition, as a result of a pain stimulation, excessive activation of sympathetic nerves which innervate the vertebral artery occurs. This process is followed by a continuous and persistent spasm.

Stenosis of the subclavian artery provoked by a fracture or other diseases may also become the reason for vertebral-basilar insufficiency.

Rough or clumsy medical manipulations that occurred in a manual therapy session as well as neck traumas may also cause a vertebral artery dissection.

All of this is not just a description of diseases, disorders and deviations. It is an attempt to call the attention of highly skilled professionals to the source of numerous problems of children and adults and the problems that occur as a result of underestimating the importance of early diagnostics of the cervical spine.

Let us give our children a better chance. It is possible to improve the lives of afflicted children and to bring up a happy, healthy generation.